Showing posts from September 26, 2009
Show All
September 26, 2009
Well, Floyd Mayweather Jr's comeback fight against Juan Marquez did not disappoint. Ive been keeping a close eye on Mayweather since he totally smashed our boy Ricky Hatton back in 2007. It was obvious from round 1 that poor old Marquez was in for a troubled night and not one he will want to remember. I even caught a glimpse of compassion from Mayweather as he toyed with the first-rate Mexican hero in the later rounds, having floored him in round 2. So, Mayweather still reins supreme throughout the super Welterweight division and Welterweight division with a record of 40 wins 0 losses 25 Ko's. Who's next? Manny? Mosley? Please dont say Khan. I know styles make fights. It's like when Frazier beat up Ali, then Foreman demolished Frazier, then Ali comes outta retirement to rope-a-dope Foreman ! So, you never can truly rule anyone out. It's gonna be interesting, but in my opinion Floyd Money Mayweather is just too damn good, even when bringing his (B) game.
Post a Comment
Read more

Marquez gets fucked up and Mayweather is still KING. 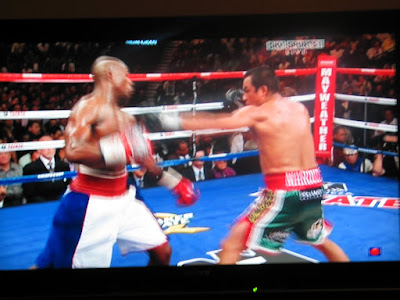