Letter of the Meek 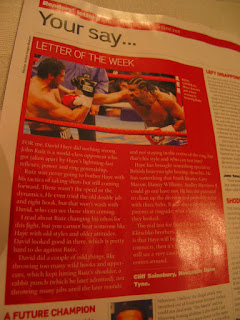 Letter of the Meek

April 10, 2010
I have a profound interest in Boxing, so much that I recently wrote to Boxing News about David Haye's first defence of his WBO world heavyweight championship belt against the American John Ruiz. My thoughts made this weeks letter of the week, because believe me when I tell you I know this GAME! FOR me, David Haye did nothing wrong. John Ruiz is a world-class opponent who got taken apart by Haye's lightning-fast reflexes, power and ring generalship. Ruiz was never going to bother Haye with his tactics of taking shots but still coming forward. There wasn't the speed or the dynamics. He even tried the old double jab and right hook, but that won't wash with David, who can see those shots coming. I read about Ruiz changing his ethos for this fight, but you cannot beat someone like Haye with old style and older attidutes. David looked good in there, which is pretty hard to do against Ruiz. David did a couple of odd things, like throwing too many wild hooks and upper-c
1 comment
Read more
More posts