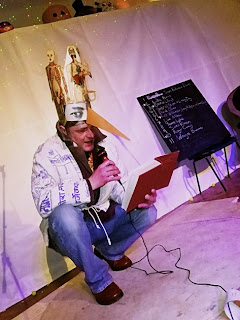 The night predominantly ran on scored improvisation, which was complex and challenging to the easily offended. The Big Kahuna’s behind Reactor Halls’ ongoing program of guest-curated nights commissioned this event. If you haven’t been to one of the other events I recommended you jog on down to check out the action. A rear end kick to the art world’s friend was delivered by compère Eǝrth Rod. Consuming large quantities of what appeared to be whisky, Rod was at the top of his game. Among the intermissions he juxtaposed eccentric introduction of acts, light-hearted Q and A and the appearance of urinating on stage. Pissing hell. To state the obvious this was no straightforward open mic night.  This was more a live art event that used an open mic night hat to generate a pick-n-mix of performances. Skit time included satire, mime, poetry and music. Among the performers was Daniel Oliver with his unique calm energy, superb control of the room and off the wall concepts. Wayne Burro
Post a Comment
Read more
More posts