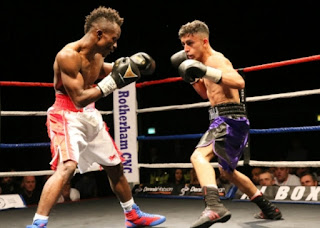 Dennis Hobson has hailed Waleed Din, even though the Sheffield fighter lost his Commonwealth flyweight title fight against Cameroon’s Thomas Essomba last Saturday (October 17). In an enthralling encounter at Rotherham’s Magna Centre, the pair put on an exciting show for the fans, with Sunderland-based Essomba ultimately proving too big and strong for Waleed, stopping the 22-year-old in the penultimate round. Din left everything in the ring, and had his successes, but was over in the fourth round and down three times in the eleventh before the towel came in and referee Steve Gray stopped the action at 1:30.  Essomba will likely defend his newly acquired title before potentially moving onto the world scene, while Din’s future looks certain to be below flyweight.   “The future for Waleed is to campaign at a lower weight,” explained Hobson.  “I’d always said that we’d probably need to move him down.  Credit to Waleed and Thomas, I’ve seen a lot worse title fights.  Waleed fough
Post a Comment
Read more
More posts