Showing posts from November 9, 2016
Show All

Continuing with his pledge on Tuesday , to give back to the city in which he has dedicated himself to resurrecting professional boxing, promoter Dmitriy Salita of Salita Promotions joined a group of fighters and trainers to work as a volunteer for Forgotten Harvest , one of the nation's largest food rescue organizations.   The group, (that included Salita, Sugar Hill Stewart (trainer), Zach Shamoun (fighter), Theotrice Chambers (trainer), Muheeb Fazeldin (fighter), and Andrei Saakyn (Salita Promotions) all involved with his latest "Detroit Brawl," event at the Masonic Temple in Downtown Detroit, on Saturday, November 12 , spent a day working in Forgotten Harvest's Royal Oak, Michigan, warehouse packing food to be delivered to families in need.     True to his word, Salita has incorporated a charitable element to every one of his Detroit shows. In addition to the time spent volunteering, he will be donat
Post a Comment
Read more 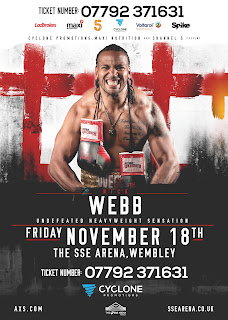 Cyclone Promotions, are pleased to announce that Surrey’s undefeated heavyweight prospect Nick ‘Wild’ Webb will box in a six-round contest live on Spike UK, as part of the undercard to George Groves vs Eduard Gutknecht at the SSE Arena, Wembley on Friday November 18 , sponsored by Maxi-Nutrition. The talented Webb, 8 (7) – 0, will make his second appearance on a Cyclone Promotions bill in the space of a month, having boxed on the undercard of Josh Taylor’s Commonwealth super lightweight title victory over Dave Ryan last month in Edinburgh. The 6’5” wrecking machine Webb was in scintillating that night as he made short work of Croatia’s Jakov Gospic, a man who had previously taken the likes of Erkan Teper into the later rounds. The Scott Welch managed prospect will be boxing for the sixth time this calendar year on November 18 , against an opponent to be named shortly, and he will be hoping to make it a hat-trick of
Post a Comment
Read more
More posts