September 11, 2015
One of this year’s most anticipated showdowns will be screened live and exclusive on BoxNation when middleweight titans Miguel Cotto and Canelo Alvarez clash in a world title superfight not to be missed on November 21 . The Puerto Rican legend Cotto will put his WBC middleweight title on the line at the Mandalay Bay in Las Vegas, with ‘The Channel of Champions’ BoxNation once again proving its punching power by adding yet another colossal contest to its action-packed schedule.  These two icons are set to meet in the height of winter but no matchup will be as sizzling hot as this one when old feuds are renewed as another Mexico-Puerto Rico rivalry takes shape.  Both nations have slipped on the gloves and settled their arguments a number of times in the ring, including historic brawls such as Salvador Sanchez’s knockout of Wilfredo Vasquez and Felix Trinidad’s ferocious meeting with Oscar De La Hoya.  Now, a new chapter is ready to be written with Cotto and Canelo set to
Post a Comment
Read more

September 11, 2015
Two-time world champion boxer Amir Khan is leading a joint Penny Appeal and Amir Khan Foundation convoy to distribute vital aid to refugees stranded on the island of Lesbos (Greece). A UK-wide donation scheme has been set up by Penny Appeal and Amir Khan Foundation, allowing people to donate towards food, water, hygiene essentials and shelter.  People can also drop off other items like clothes, footwear, hygiene disposables and outdoor equipment at designated collection sites across the UK.  These items will then be driven to Greece by volunteers and then handed out by both teams, including Amir Khan.  Amir Khan said: “It’s heartbreaking to see images of children losing their lives as their families flee from devastating conflict.  “What’s even more disturbing is knowing that many more lives will be lost unless we provide urgent aid to these refugees who are stranded and in desperate need.  “We’re seeing stories of people in countries like Germany doing so much
Post a Comment
Read more

BROWNE TO BE TRAINED BY BENN AND WILLIAMS 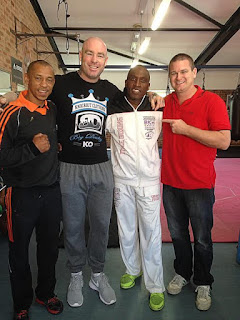 FORMER two-time world champion Nigel Benn and experienced Aussie Rodney Williams have been selected as the men to guide Lucas "Big Daddy" Browne to world title glory. Browne, who is the mandatory challenger to WBA champion Ruslan Chagaev, had been working with the legendary Jeff Fenech, but now feels his style is better suited to Benn and Williams's methods. Williams has trained some of Australia's best upcoming talents in recent years while Benn really needs no introduction to fight fans across the world. Nicknamed 'The Dark Destroyer', Benn was one of the world's most feared middleweight and super-middleweights in the late 1980s and early to mid-1990s. Famed for his all-action style, the Londoner was a devastating puncher and won the WBO crown at middleweight by knocking out Doug DeWitt in 1990 before adding the WBC 168lb title to his collection by halting Mauro Galvano two years later. Benn is also close friend of Ricky Hatton and called the Hitman
Post a Comment
Read more 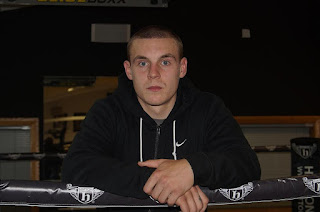 Light-welterweight Sam Evans says he's still pinching himself after being offered a professional contract with four-time world champion Ricky Hatton. The 19-year-old was a fan of the Hitman growing up and impressed him enough during a two day trial to earn a promotional deal. Evans, who is managed by Errol Johnson, has moved into a house in Hyde, Greater Manchester and will also be trained by Hatton and his assistant Mike Jackson. "When I got the phone calling telling me I had the opportunity to train with Ricky, it was a massive shock," Evans said. "I did two days with him in the gym and it was really hard, but I must have done well because I'm training with him every day now. "Ricky was one of my heroes as a kid so to be trained and promoted by him is great. I don't think there's anyone better to learn from." Evans will make his pro debut on Black Country Boxing's show at Banks's Stadium, Walsall on Saturday October 10 and he'
Post a Comment
Read more

September 11, 2015
Boxing star Amir Khan will be BoxNation’s special guest analyst for Floyd Mayweather’s final fight against Andre Berto and has backed his stablemate to cause a ‘big surprise’. ‘The Channel of Champions’ will be showing the legendary Mayweather’s last outing exclusively live in the UK, with Khan making up a knowledgeable trio of on-air talent which also includes charismatic presenter Steve Bunce and two-weight world champion Steve Collins.  The star-studded guest list will see Irish hero Collins, who has shared the ring with some of Britain’s biggest names including Chris Eubank and Nigel Benn, now sharing the couch with another in Khan as they bring BoxNation subscribers their unique and privileged insight. 28-year-old Khan was in the running to face the undefeated Mayweather this Saturday night but was left at the altar after the pound-for-pound king opted to face the hard-hitting Berto instead.  The two-time world champion though, who trains with Berto, is giving hi
Post a Comment
Read more

September 11, 2015
British ace George Groves says he’s ready to burst onto the world scene as he challenges for the WBC world title in Floyd Mayweather’s final bout. The 27-year-old takes on super-middleweight champion Badou Jack this Saturday night, live and exclusive on BoxNation, on the undercard of pound-for-pound king Mayweather’s last fight against Haitian hard-hitter Andre Berto.  It’s been a whirlwind career for Londoner Groves who has twice fought for the world title, those being two defeats to rival Carl Froch, but having bounced back with two wins including capturing the European title he insists he is ready to now take the boxing world by storm.  “Every fight is more vital than that last, more important than the last and there's more to lose, especially once you've lost,” said Groves.  “I came back after losing last year and won the European title, I became the mandatory of the WBC. Since then we've been rolling and waiting for our opportunity to fight for the W
Post a Comment
Read more
More posts