Showing posts from November 7, 2009
Show All 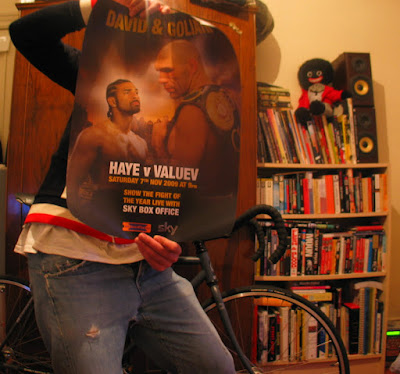 Post a Comment
Read more
November 07, 2009
People who know nothing about boxing have become boxing experts and confusing Nikolay Valuev's size with natural ability. Ok, apart from Valuev's natural advantage he has zero skill, lets not forget a 44 year old Evander Holyfield took him to 12 rounds in a close and very controversial decision a few years back. Valuev is slow, lacks a decent punch and is now 36, now correct me if i'm wrong but those are bad stats when your in a heavyweight division holding the WBA belt, and facing David 'The Haymaker' Haye. Unfortunately ladies, this is a contact sport were size doesn't matter. In 1919 a similiar contest happened when Jack "The Manassa Mauler" Dempsey savaged the giant heavyweight champion Jess Willard. Jack Dempsey was 187 pounds and stood 6'1 against the champions 245 pounds and 6'6 !! So what if Dempsey's manager placed a bet on the fight and was said to coat Dempsey's hands in Plaster of Paris ! PAH ! Sounds obvious and easy to
Post a Comment
Read more
More posts